Creating a new website can seem like a daunting task. You will likely have a lot of questions running through your head, such as "How should my website look?", "How do I want my website to function?" and "Where do I even begin?". The best place to start with any project - websites included - is to decide on the foundations.

If you've googled "foundations of a website" before, you might have come across a few words you haven't heard of before, such as CMS and framework. While we have talked about similar things to this in prior articles - which you can read about here - today, we're going to look at two of the most popular website foundations around in WordPress and Laravel in order to determine which is best for laying the groundwork for your new website.

Before diving into the strengths and weaknesses of each, let's look at some definitions and origins. WordPress was released in 2003 by Matt Mullenweg and Mike Little as a free open-source content management system (better known as CMS). If you've looked up making a website before, you've likely at least read about WordPress. It is the world's most popular CMS, with over 60 million websites using it - including some of the most popular websites in the world such as Sony Music, Microsoft News and Vogue.

WordPress is all about its themes and plugins in its architecture. There are over 55,000 plugins currently featured on WordPress that users utilize alongside their chosen theme to create a website that best fits their needs.

Laravel launched in 2011 from the hands of Taylor Otwell as a free open-source PHP framework that has a focus on web applications and making complex tasks easier to create. Following a feature-packages architecture, Laravel has been rising through the ranks to become on of the most liked and well-known web frameworks among developers - even becoming the highest-rated PHP framework on software development platform GitHub.

What's important to note here is what exactly WordPress and Laravel are. WordPress is a system - full of many pieces and parts put together to create a whole unit. Meanwhile, Laravel is a framework - all the bare bones materials are there, but they can be put together however you like.

Now that we've covered what each of these foundations are, let's go into more detail about the intricacies of each. Due to its nature as a CMS, WordPress is typically the go-to choice for projects that: 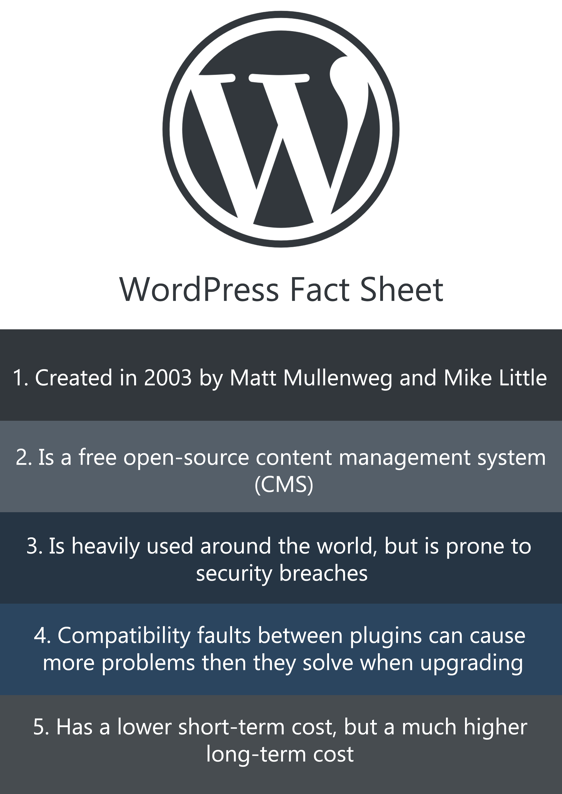 It is also extremely popular with less tech-savvy business owners and workers due to its user-friendly interface - also known as an admin panel. Many people see how WordPress' interface operates and believes that it's the best option to go with since you can update and edit the website yourself without the need for a web developer. While this isn't necessarily false, a user-friendly interface can be made with any good framework as well - and likely with less long-term problems, which leads us to our next point.

For all the good things WordPress has going for it, there are a lot of issues that arise from using the system over long periods of time. One of WordPress' biggest problems is security - due to its high popularity and easy-to-understand mechanisms, it has become a prime spot for hackers to take down websites using malicious code. Some plugins might not be as secure as their creators would like to believe, and if these dodgy plugins are on your site it can end badly.

For most people, the logical thing would be to upgrade everything as soon as updates become available - updates can be for plugins, your site's theme, or even WordPress itself. But unfortunately, this brings up another glaring issue with the system - compatibility. Having many plugins available seems great, but problems start to crop up once plugins need to work together with themes - or even other plugins.

Here's an example - imagine you have made a tower out of thin toothpicks. Sure, they're not very stable on their own, but you've compensated for that by structuring the tower to distribute the weight and lean evenly. It's working well - until an "update" comes around. Imagine now that you take the middle section of the tower out, replacing the thin toothpicks in that section with thicker and sturdier twigs. Yes, the twigs would probably make for a better tower, but the rest of your tower is still made of toothpicks - and your structure was designed with toothpicks in mind. With this imbalance, the tower becomes much less stable, or could collapse altogether.

It is the exact same situation with WordPress websites - when plugins, themes or even WordPress itself is updated, it can cause major parts of your website to have problems. This is why managing WordPress sites can become frequent affairs - and that means more costs in the long-term for you.

WordPress likes to advertise itself as a highly customizable CMS, but there are definitely limits to what you can do with it. Gaining as many viewers on your website is a good thing to be sure, but if the customer-base of a website grows too large, it can bog down the speed of the site and cause problems. This is another example of WordPress' struggles being a long-term solution - if the project grows too big, it will have to be recreated in a framework like Laravel anyway. 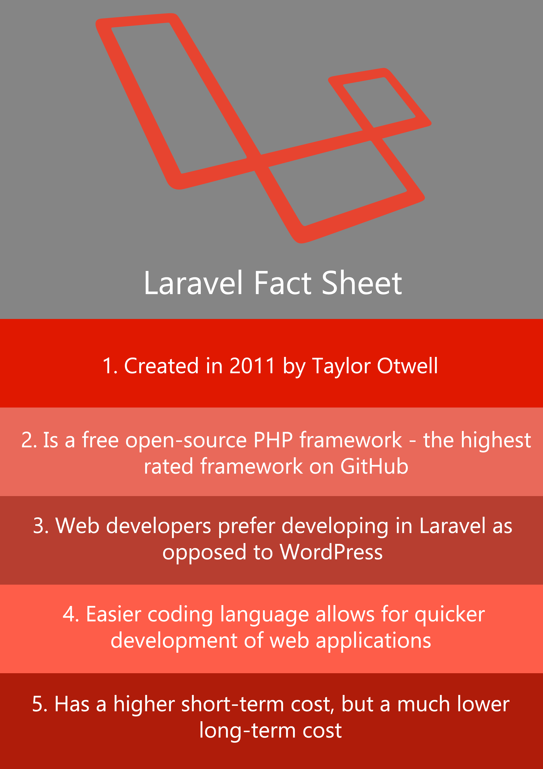 One of Laravel's strongest assets is the ease of developing web applications on it. For any web application - which you can read more about here - there is always a mix of tasks needed to create them. Some of these tasks will be common tasks that are implemented in all applications, while the creative tasks are the ones that make your application perform its desired function effectively.

In designing a web application, developers want to be able to implement the common tasks as fast as possible in order to get straight to working on the creative tasks that will be even better if they can get more time spent on them. Different web apps take different amounts of time to create, but with a framework like Laravel they are likely to be much timelier and more cost-effective for you - especially when compared to WordPress.

WordPress is heavily advertised as the world's most popular way to build a website, but that doesn't discount Laravel as a popular framework too. Since its release in 2011, Laravel has built up a large following of web developers who much prefer working on it than WordPress. This also means that choosing to go with Laravel won't be too difficult, since there are plenty of developers who have experience working with the framework.

In this article, we've taken a deeper dive into the workings of WordPress and Laravel to see how each of them functions. While most people immediately think of WordPress when wanting to make a website, the security and compatibility issues dampen the experience quite a bit, causing more headaches than needed. If you're looking to get your website up and running - or looking to revamp your old site - we recommend Laravel as the best website foundation to make sure your site has all the bells and whistles it needs to suit your business.

Get in touch with AB Web Developers today to get your next great website idea up and running.

Are your business systems on point for 2022?